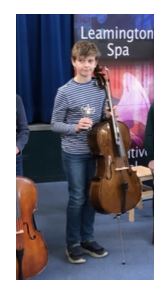 He achieved first place in both classes, with an 'Outstanding' (90+) given in both cases for 'an exceptional performance, both technically and artistically'.
Even more success followed when Thomas was awarded a special prize for the best performance for a younger aged strings player.
Kathryn Heathcote (vice-chairman and strings section secretary of the Leamington Competitive Festival) wrote in her citation that she had decided not to give the award to one of the members of the National Youth Orchestra preferring to dedicate the award to Thomas. She had chosen Thomas as 'there was something special that spoke to her in the performance and that he showed great promise'. Well done Thomas.