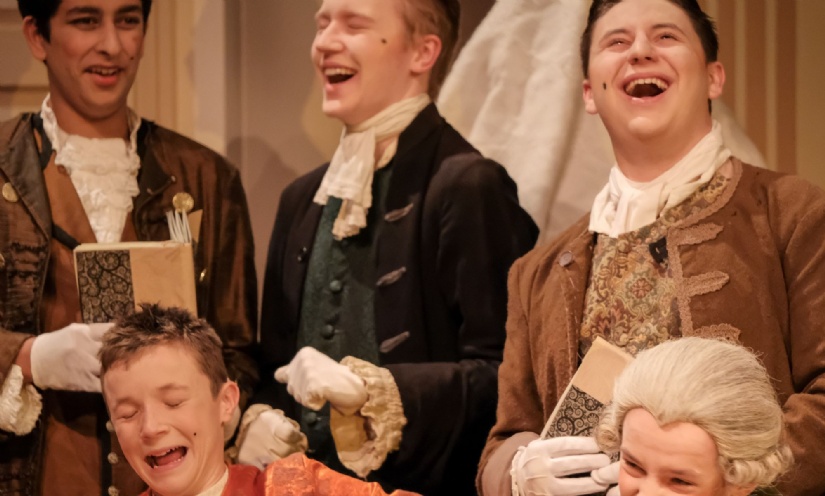 The audience was treated to a truly hilarious production of 'A Laughing Matter' performed in the Bridge House Theatre.

Warwick School and King’s High School’s latest production explored the hilarious world of David Garrick’s eighteenth century Drury Lane theatre last week as they presented April De Angelis’ ‘A Laughing Matter’. Supported by his wife Eva (Avani Bhutta), Mr Garrick (Lawrie Gartshore) is planning his final season before retirement and has to choose between two plays: Oliver Goldsmith’s (Edward Robinson) ‘She Stoops to Conquer’, or a forgettable, yet morally upright play, heavily patronized by local royalty. His choice plays out over the two acts with an extended flashback section exploring his life in the theatre from young actor admiring the revolutionary skills of Macklin (Will Parsons) and his personal liaisons with leading actresses of the time – Peg Woffington (Poppy Whittaker) and Mrs Cibber (Maya Evans). Theatre life is mocked throughout the play in the petty one-upmanship of company read-throughs or politically charged meetings during which the actors revolt against their wasteful management. Alongside this runs the subplot of a young actor Sam Cautherley (Zak Parker) who was left on the steps of the theatre as a baby and has since been Garrick’s protégé. As the events of the play unfold, so we are left in no doubt that this is, in fact, Garrick’s son, the abandoned product of one of his many relationships at the time.

We were also treated to a ludicrous representation of the first members’ club, led by a suitably aggressive Samuel Johnson (Harry Ratcliffe) and frequented by the leading thinkers and powerful men of his day. Their pompous and self-important dialogue was subtly mocked by the attendant ladies who would manipulate and undermine at every opportunity- to great comic effect.

Later, when Garrick chooses the morally upright play a largely xenophobic riot takes place in his theatre, Lady Kingston (Liz Willey) is incensed and a farce ensues as actors attempt to regain her allegiance and win-over their audience by comic impressions and even mounting a musical of King Lear instead, losing costumes and getting hit by flying vegetables in the process.

This superb ensemble handled the complexities of a contemporary farce about a little known theatrical age with great skill and comic timing, supported by fabulous costumes and staging (by Judy Reaves and Helen Musgrove). The Bridge House Theatre became a Georgian Theatre for the run, even down to the on-stage boxes (where those that wished to be seen, could be seen!), candlelit lighting and even interval interludes to entertain the audiences.