Success to Everest Base Camp 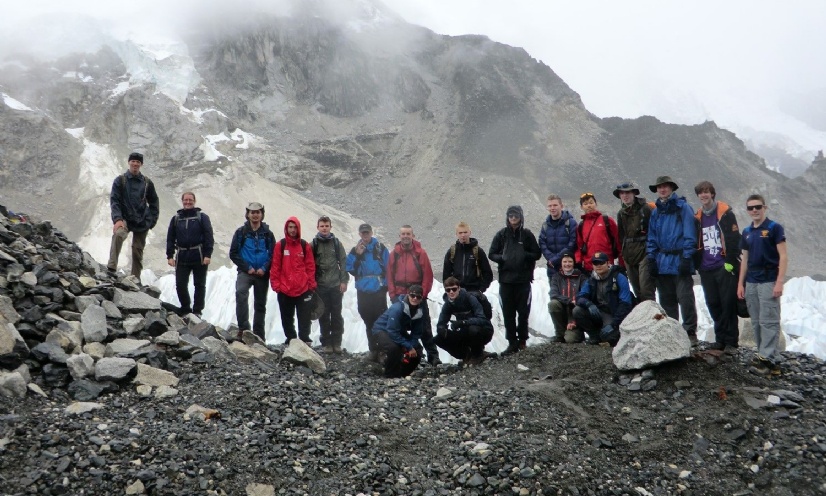 A team of 17 boys and 2 staff travelled to the Himalayas challenged with completing the Everest Base Camp trail.

The first couple days saw the team walking up the lush Dudh Khola valley, passing through villages adorned with Buddhist prayer flags, Mani (prayer) wheels and long walls of Mani stones. They crossed the Dudh Koshi river a number of times on a variety of impressive suspension bridges, the highest of which, the Hillary Bridge, marked the start of the steep climb to the town of Namche Bazaar. The first 'rest' day to aid acclimatisation to the high altitude included a 300m ascent to a memorial honouring Tenzing Norgay and a viewpoint where they watched an eagle soaring.

The next phase of the trek gave them their first glimpse of Everest, a beautiful white pyramid in the middle of a panorama of snow-capped peaks. The next stage was walking steeply up through thick rhododendron forests, to reach Tengboche Monastery, the largest and most important Tibetan Buddhist monastery in the region. Continuing above 4000 metres, the trees disappeared and the team found themselves walking through scrubland and meadows with a multitude of interesting and colourful flowers.  Another rest day enabled the boys to adapt to the ever thinning air at over 5000m, and then the final two day push to Base Camp began. Climbing up through rocky moraines, over Thokla pass where dozens of memorials have been built to remember the Sherpas and climbers who have lost their lives on Everest, they walked alongside the mighty Khumbu glacier and eventually reached their goal – Everest Base Camp!

Overnight it had snowed, making the 3hour ascent of Kala Patthar all the more challenging. At such high altitude, several of the team were starting to feel the effects and the going was slow, but eventually the whole group was at the 5545m viewpoint with seven of the boys climbing the extra 40metres to the prayer flags marking the peak. Sadly, the snow clouds meant there wasn't a 360° panoramic view of but greeted with glimpses of Everest, Nuptse, Lhotse, Pumori and Ama Dablam was awesome.

After nine days of climbing, it took just three to retrace their steps and walk back to Lukla, visiting Pangboche Monastery and Khumjung Secondary School (built by Sir Edmund Hillary) on the way. Some spectacular temples and architecture were also visited in contrast to the sad sight of the 2015 earthquake damage.

With a total distance of 130km and an incredible overall ascent (and descent) of 8200m, this trek was always going to be a huge challenge. The whole team made it which is a massive achievement and a great testament to the strength of the boys involved.