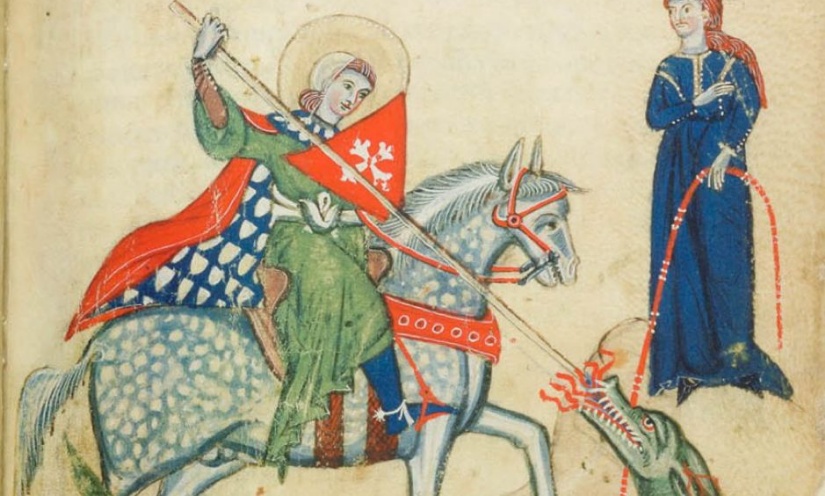 Last Saturday was St George’s Day. St. George’s Day is celebrated every year on 23 April and it marks the death of the patron saint of England.

Despite attempts by various organisations and politicians (including the Prime Minister during his time as Mayor of London) to use the day as an opportunity to whip up a collective English spirit, it remains largely ignored. Particularly when compared to the festivities that accompany the patron saint’s days celebrated in Scotland, Wales, and Ireland.  Indeed, a strong argument could be made that the English are more likely to observe St. Patrick’s Day, and more likely to correctly identify the date of St. David’s Day than that of their own patron saint.

Why should this be the case?

The flag of St George. The English national flag. How would you react if you saw a St. George’s Cross being flown outside a house on your street? Would you be overcome with pride, or would you feel a little bit anxious? Unfortunately for many the English flag has negative connotations. Recently English national iconography has been appropriated by members of the far right and for many the flag of St George represents a facet of the national character that is best hidden away. A chauvinism and narrowness that has come to be identified with nationalist organisations like the English Defence League and the British National Party, and with mobs of travelling football hooligans. St George has been “hijacked” by the extreme right as a symbol of triumphalism and division.

The geographical location of someone’s birth or the nationality of their parents is of absolutely no moral significance. The belief that one nation is intrinsically superior to another, and that it’s interests and those of its members should be promoted to the exclusion or detriment of the interests of others is abhorrent. However, the desire to recognise and celebrate the culture and tradition of a nation is not.

That English national iconography is associated with racial intolerance is ironic. St. George was not English. He may be the patron saint of England and be hailed as a national hero, but he was born more than 2,000 miles away in an area that is now part of modern-day Turkey. In fact, St. George never even visited England, and he is thought to have died in the Roman province of Palestine. St George is a truly international saint. St George’s Day or the Feast of Saint George is celebrated annually on 23 April in many countries and is considered a state holiday in Rio de Janeiro. England is not the only country or region to claim him as its patron with Venice, Genoa, Portugal, Ethiopia, Catalonia, Bulgaria, Georgia and Romania among others who do. The cross of St George is the flag of Georgia.

Rather than a symbol of nationalism and division St George should be a symbol of the similarities between people of different nations.

St George is a martyr who died for his Christian faith. It is believed that during the persecutions of Emperor Diocletian in the early 4th century, St. George was executed for refusing to make a sacrifice in honour of the pagan gods. He was canonised in AD 494 by Pope Gelasius long before he became popular with English kings. Edward I who ruled from 1272-1307 had banners bearing the emblem of St. George however it was not until the reign of Henry VIII that the St. George’s cross was used to represent England. Why did the kings of England choose to be represented by an officer in the Roman army? - Yes, it is likely that George was a Roman soldier rather than the chivalric knight in shining armour on horseback depicted in popular culture

St George is of course most famous for killing a dragon. There are two versions of the story. In the most popular St George saves a princess by slaying a dragon. The more developed story is that St George rode into Silene, in what is now Libya to free the city from a dragon who had developed a taste for human flesh. It is a story that postdates the real St George by several hundred years. The earliest images of George and the dragon that survive date from the 9th Century – 500 years after his death. Even if we accept that the dragon may have been a crocodile, as some orthodox Christians maintain the story is unlikely to be based on fact. The story and the images are almost certainly a metaphor for the battle between good and evil, the rescue of the Church from persecution and the triumph of innocence over evil. The princess representing the Church and the dragon Satan. The dragon as a Christian symbol of evil comes from the book of Revelation – the final book of the Bible.

‘The great dragon was thrown down, that serpent of old that led the whole world astray,
whose name is Satan or the Devil.’

Arguably nationalism is one of the ‘dragons’ or evils that stalk the world today alongside, poverty, warfare and disease.

Rather than a symbol for the belief that some people are superior to others due to an accident of birth, St George should be a symbol that people should be judged on their actions and the content of their character. After all he became the patron saint of England, despite being born in Turkey, because the kings of England recognised his virtues and wanted to be identified with these same qualities.

On this basis, the English should be proud to celebrate the festival of St George because in celebrating the patron saint of England they are joining hands with people from around the world to recognise a saint who represents having the courage to fight against evil. Whilst at the same time recognising and celebrating English culture and tradition, acknowledging that it is not intrinsically superior to the cultures of other nations, and that the world and modern-day Britain are richer for their diversity.