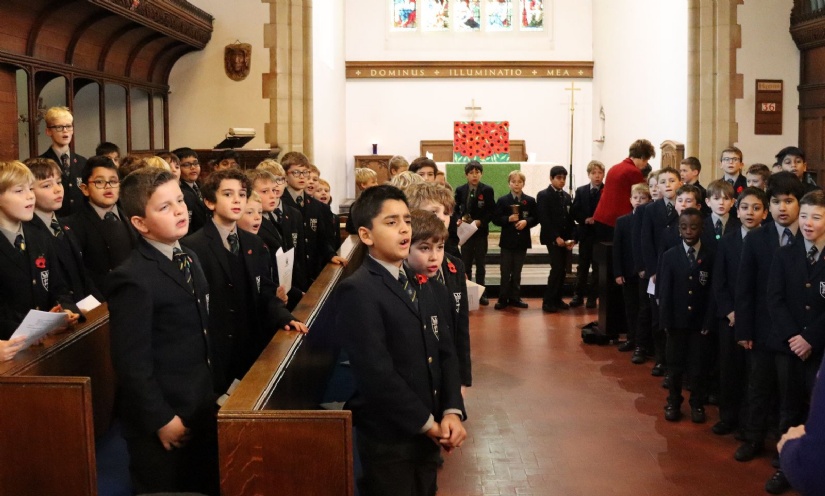 A cannon fired from Warwick Castle marked the start of a two minute silence observed by boys and staff in the Junior School.

"On Wednesday Year 5 boys hosted the Remembrance Service in chapel. Our Year 5 boys have completed work on the war poets and have written letters back from the front. It is clear from reading the boys' work how much they have gained in terms of understanding and empathy for the soldiers in the trenches.
On Monday I spoke to the boys about my visits to the war memorials at Lostwithiel in Cornwall. I spoke about how the majority of adult males within the community would have joined and served alongside each other. In several instances, the same family names featured as four members of the Vincent, Phillips and Jeffery families all served together. Undoubtedly in a village, the soldiers would be closely related.
I also talked about one particular family, the Beechey family from Lincolnshire. When war was declared, all eight sons of Mrs Beechey volunteered to serve. The film 'Saving Private Ryan' detailed the true story of an American detachment in the Second World War sent to bring the fourth brother home safely when his three brothers had been killed. In the case of the Beechey family, no such consideration was made.
Two of Mrs Beechey's sons had emigrated to Australia and served in the Imperial Australian Army. Harold Beechey was wounded on the beaches of Gallipoli before recovering from his injuries only to lose his life at the battle of the Somme. His brother, Chris was a stretcher bearer who was invalided out of the army following a fall.
Four of the brothers joining English batallions did not return. Out of the eight sons in uniform, five were killed. Only two returned safely; one can only imagine how the news of so many losses within the family shaped the remainder of their lives.
Mrs Beechey's losses were exceptional, but each and every one of the 886,939 British casualties in the Great War brought devastation to families. I impressed upon the boys the need to remember, to fall silent and to give thanks that we live in peaceful times. Hopefully the last few days will have provided some explanation and significance of why we continue to wear the poppy. "