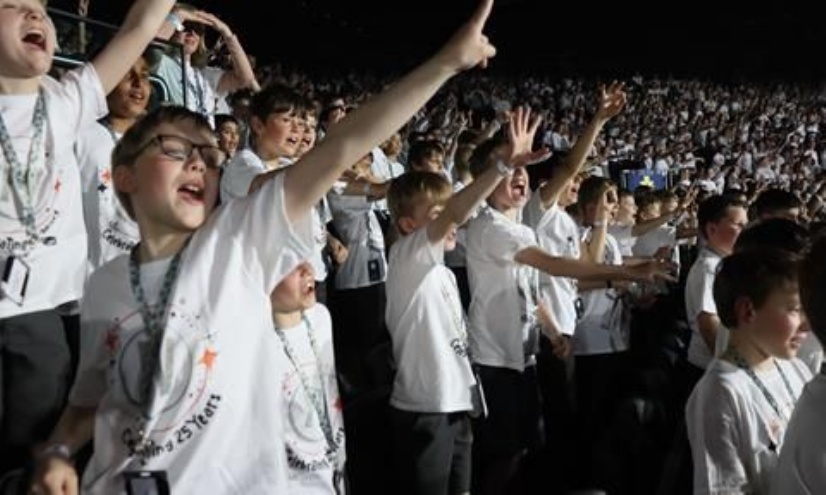 I hope all the boys and families enjoyed the extended bank holiday weekend. As with all weeks this term, there are always some major events to look forward to. This week was no different with the U11s taking part in the Independent School Football Association finals and 160 boys heading off to the World Events Arena.

Young Voices is quite an extraordinary event in the calendar. The bringing together of so many children is a major logistical challenge. It is a great opportunity for our boys to join a massed choir backed by a professional band.

No sooner had the boys seated themselves, the rehearsals began. Joining the Junior School boys were our friends from the Prep School. I think we can say with some certainty that the Junior School contingent were the single largest contributor of performers. The compere for the performance made the same point when he commented that there could not be many boys left in school.

Joined by parents for the evening performance, all the boys’ hard work over the last few weeks was on show as they sang and danced their way through their repertoire. By the end of the evening, the boys had exhausted themselves of song. It was at that point that the most challenging part of the day began. Veterans of previous shows know what to expect. With a very late night already guaranteed, thousands of performers streamed for the exit and the buses.

Ensuring that all the Warwick boys make it to the bus has become a fine art. Many schools opt for the high visibility lanyards. Unfortunately, with so many schools opting for the same tactic, this may not be quite so sensible when first considered whilst completing risk assessments. I noted one school providing crowns for their children to distinguish one from another.

The Warwick method involves rope. I must quickly add that we do not tie the boys together, we ask that they hold onto the same rope as the teacher. This simple method works a treat as the mini crocodile stays as one. Whatever method employed, a swift getaway is never guaranteed and the boys may well have fallen exhausted into their beds by the end of the evening.

All being well, we hope that our next mass participation will be in two years’ time. No doubt by then a whole new group of boys will be part of the choir. I am sure it will remain a part of the calendar for years to come.

After over 30 years of working at Warwick School, 28 at the Junior School, Mrs Turner will be retiring at the end of July.  At the start of the year, Mrs Turner reduced her commitment to three days with Mrs Hill taking on the remaining two days.  We will shortly be looking for a new part-time secretary.

Joining Mrs Turner in retirement is Mrs Cumberland.  Mrs Cumberland has been our librarian for 18 years and after school supervisor for 7.  Both ladies have been stalwarts of the school and they will be greatly missed.  There will be opportunities later in the term to thank them for their service.  In the meantime, we will be advertising both posts.