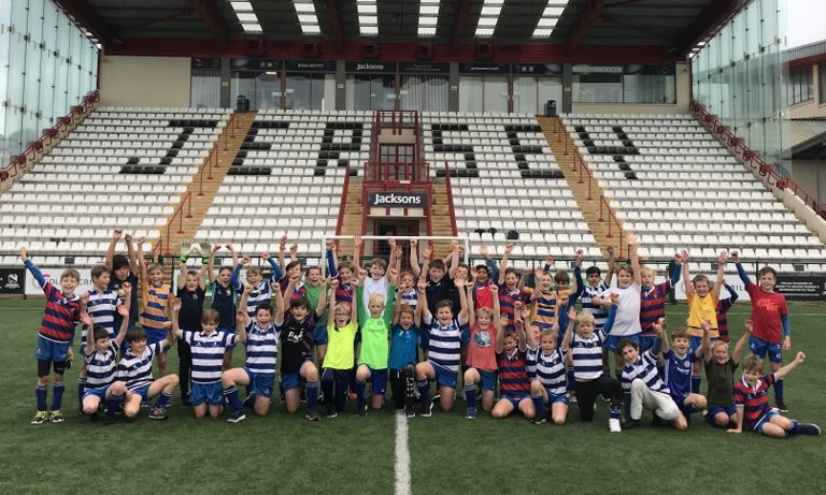 No sooner had we touched down in Jersey, we were heading towards Jersey College for a series of football matches.

The programme of fixtures both for football and rugby were well matched as our boys played two other touring teams as well as Jersey Rugby Club.
Beyond the sporting fields the boys enjoyed the hotel's impressive aqua park as well as an evening of bowling, beach activities and a quiz evening. We were all impressed by our visit to Mont Orgueil Castle and to the War Tunnels.
When visitors enter the War Tunnels, they are handed a reproduction of an identity card from an islander during the German occupation. Visitors are then encouraged to find out the stories associated with the occupation.
The identity card I received was for Harold Le Druillenec, an islander arrested by the occupiers for harbouring an escaped Russian slave worker. On 22nd June 1944, Harold was found guilty of charges and removed to France. He was then taken to the Neuengamme Concentration Camp where despite brutal treatment, forced labour and near starvation, he continued to survive. As the war approached its final days, he was taken to Bergen-Belson where he was finally liberated by the British by which time he weighed a mere seven stones. Following hospital treatment, Harold returned back to Jersey to resume his former profession as Headmaster of St John's School.
As we head towards Remembrance, it is important that our boys learn more of how events in history have impacted the lives of ordinary people. I hope that the boys on the Jersey tour have gained a small insight into the hardships, deprivation and sacrifices made by people throughout Europe.