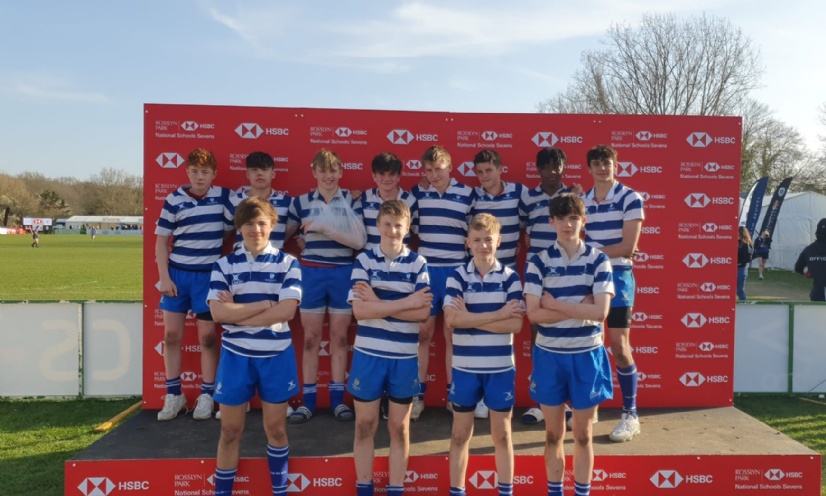 The Rugby 7s season culminated in the historic schoolboy Rugby tournament at Rosslyn Park last week. We entered teams at U11, U13, U14, U16 and U18 age groups. It was a fantastic week of weather too which provided an amazing experience for all our players.

Our U13 team were live-streamed on the RFU YouTube channel twice and managed to win three and draw two of their matches on the first day against some strong opposition. Oliver was controlled and calm throughout and Guy, Gavriel and Clark provided the speed and power out wide.

The U16s won all their matches on day one and then drew with George Watsons Edinburgh on day two. This led to a must win match vs Whitgift School where we let the opposition too far ahead before in typical Warwick fashion, fighting back to move within two point, but we ended up short. The U16s made it to the last 20 schools in the country so should be very proud.

The U18s/1VII were in the group of death in the cup competition at Rosslyn. After being 33-0 to Hartpury College we fought back to 33-29 with excellent tries from Harry and Max. Then a last minute win against Dulwich College. However, we came up short with a narrow loss to semi finalists, Ipswich, before running out of steam against Samuel Whitbread Academy. The team should be very proud indeed of their 7s efforts.

The U14s deserve a very special mention, they were quite fantastic and won all their games on day one, then on day two progressed to the semi-final with strong wins against Reigate Grammar and Radley College. The played Sedbergh in the semi and were in control at half-time, however agonisingly they lost in the last play to the eventual winners. The boys were outstanding and demonstrated exactly what you can achieve as a team when all players work hard for each other. Will, Tommy, Fin and Tom deserve a special mention.