This week we have been devoting some time to celebrating Art. Writing this blog feels very strange, as at school Art was definitely my worst subject. I struggled to draw or paint anything recognisable. And today I certainly would not describe myself as any sort of expert in art. When a painting is being discussed by experts on television and they are visibly animated by brush work or the type of paint used, I am lost.

According to Aristotle ‘The aim of art is to represent not the outward appearance of things, but their inward significance.’ Despite my shortcomings in the Art world, I am genuinely fascinated when I see an unusual piece of artwork, as I muse on its meaning and significance. Take for example the artwork above. Photographed on a visit to Berlin a couple of years ago, painted post 1989 and the fall of the Berlin Wall on one of the sections left standing, the car breaking through the wall is, as you might expect, supposed to represent the pulling down of the Berlin Wall. But it is the choice of car – a Trabant –  which was about the only car to be seen on streets of East Berlin in the Cold War, that makes this picture as it’s not just the fall of the wall, it’s East Germans being able to access West Germany for first time since the wall’s construction.

Or what about this: 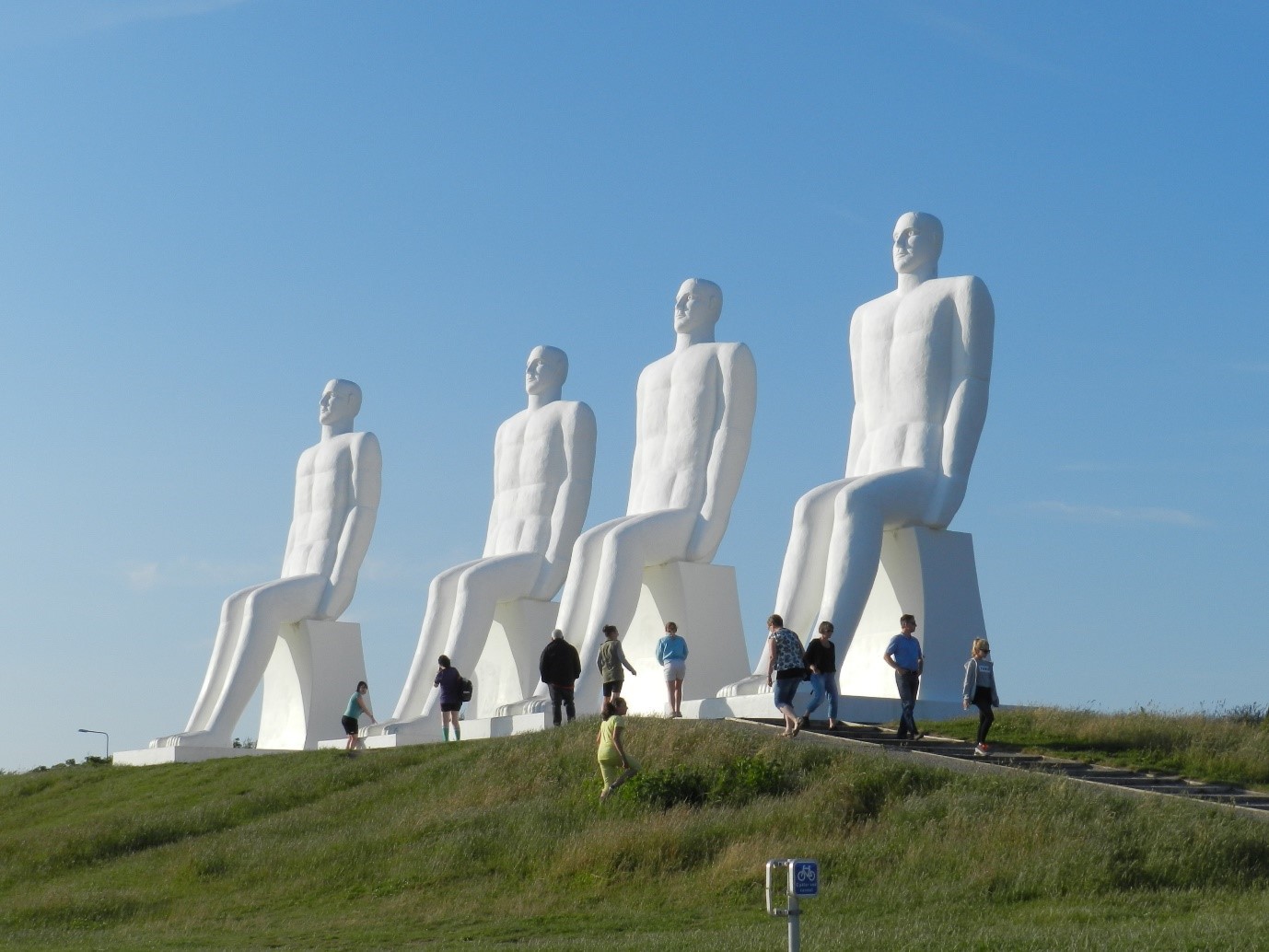 Four 9m men I came across on a trip up the west coast of Denmark, just outside the town of Esbjerb. Reminding me a little of similar sculptures in the UK like the Angel of North, this piece is called ‘Man Meets the Sea’  and its meaning, as envisaged by its creator, Svend Wiig Hansen, was the purity of humans (as portrayed by the white colour) before being influenced by others travelling across the sea from foreign lands.

While both of these examples were open air art, take a look at this picture: 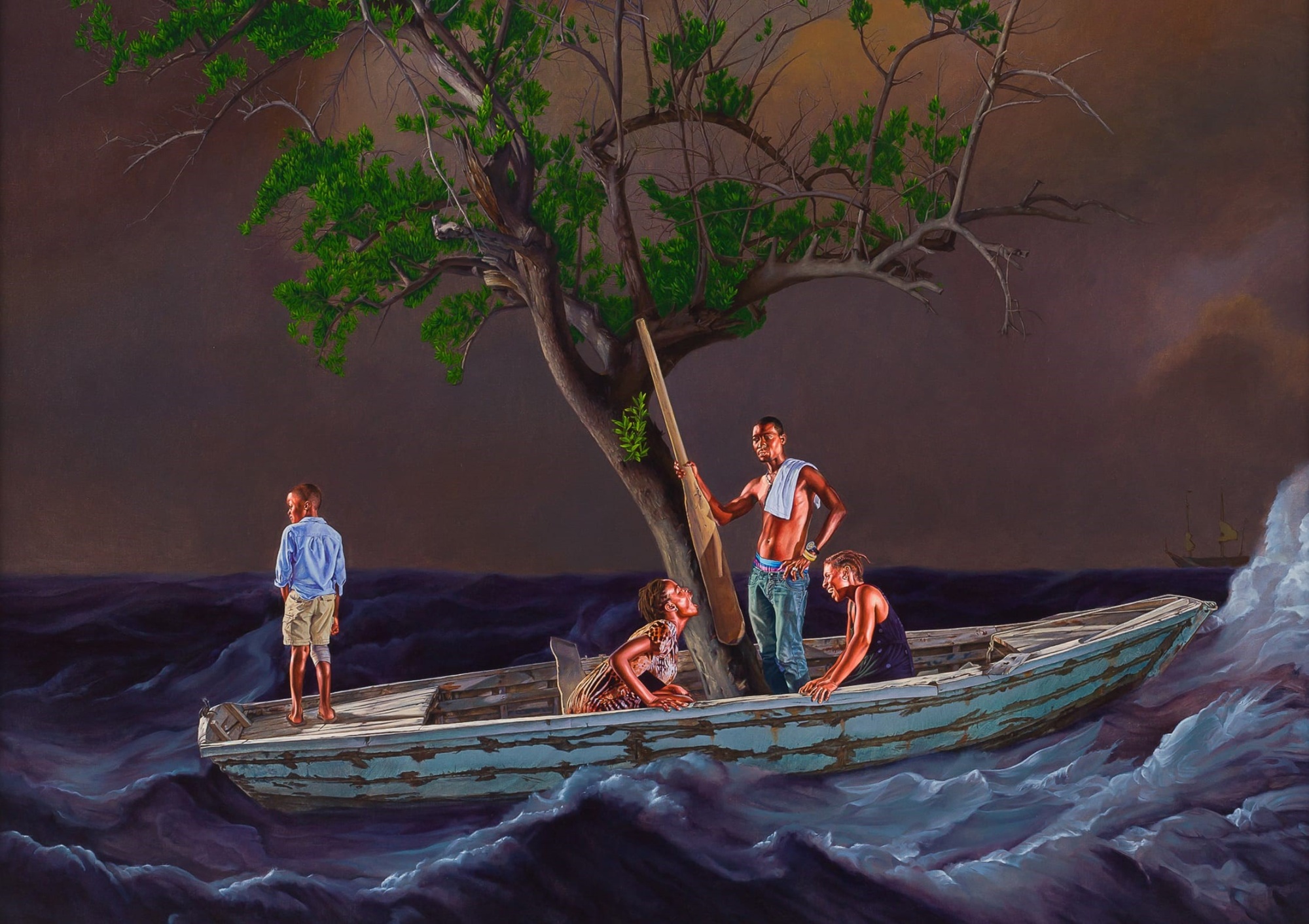 I first saw this while visiting the Queen’s House in Greenwich, London. Maybe it was the vibrant colours of the clothes, or the very unusual setting of a small boat with a tree trunk through the middle of it, I was drawn in and wanted to know more.

Called ‘Ship of Fools’, by Kehinde Wiley, it is designed to draw attention to the plight of migrants from around the world. The small rickety boat, the paddle and the rough sea are all designed to represent the precarious journey that thousands of immigrants and refugees endure today – a fact brought home to us when on 24 November last year, a small inflatable dingy packed with 30 migrants tried to cross the English Channel. The dingy capsized and 27 of those people were drowned.

The tree in the boat could have many meanings; it may represent the hopelessness of the situation – causing the boat to slowly sink, but it may also represent hope – the green leaves suggesting the migrants are looking for a better life.

Wiley also makes his feelings very clear as to the cause of the migrant crisis. Look carefully and you will see a Victorian warship in the background on the sea, suggesting that today’s migrant crisis is a result of decisions made by colonial governments over the last 100 years or so.

While my examples come from a variety of places, we don’t have to travel to appreciate Art. We are very fortunate to have talented artists in all year groups in the school and this week in assembly three of those artists spoke to the whole school about one of their pieces of Art and what inspired them to create it. Here is the artwork and what they had to say: 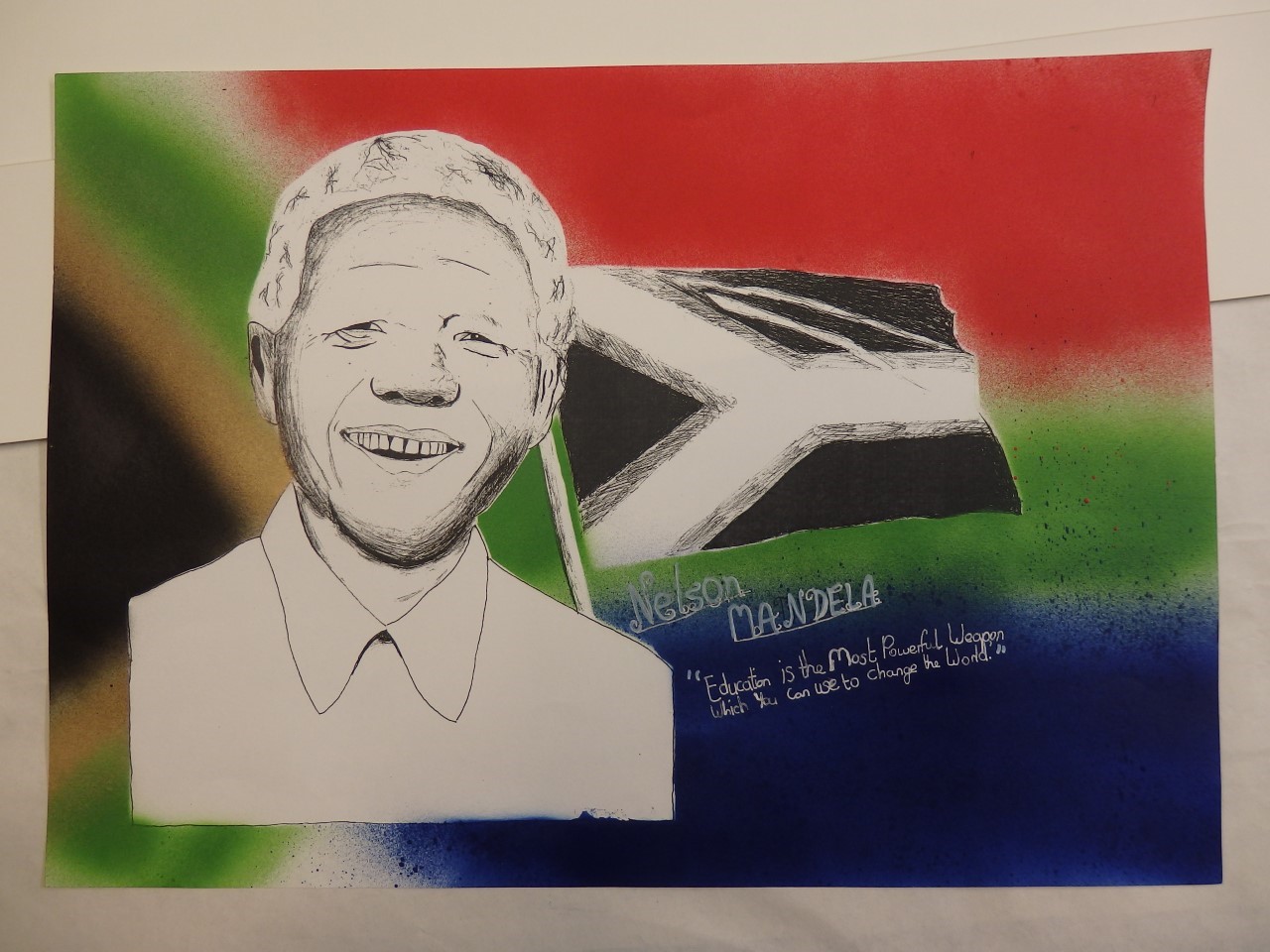 "Our art topic was on the black lives matter movement. I drew Nelson Mandela with the South African flag because of his inspiring story.

Born over 100 years ago, Nelson Mandela studied Law at University, before becoming a lawyer in Johannesburg. There he became involved in anti-colonial and African politics, joining the African National Congress, the ANC, in 1943.

After that he was elected president of the ANC, but he was arrested for leading a sabotage campaign against the government.

The following trial sentenced him to life in prison for conspiring to overthrow the state. Mandela served 27 hard years in prison but was finally released by President F.W. de Clerk in 1990.

He went on to win the 1994 Election and lead the ANC to victory to become the first black president of South Africa. He became a globally recognised icon of democracy and social justice, receiving more than 250 global honours including a Nobel Peace Prize for Uniting the country and ending segregation of people based on race and colour. He became known as the ‘Father of the Nation.’

Mandela inspired me because he never gave up hope for the cause he believed in, a country where all people had equal rights, whatever their colour or background.  Despite 27 years in prison, he continued to fight, and eventually he became celebrated around the world. He is a truly inspiring man." 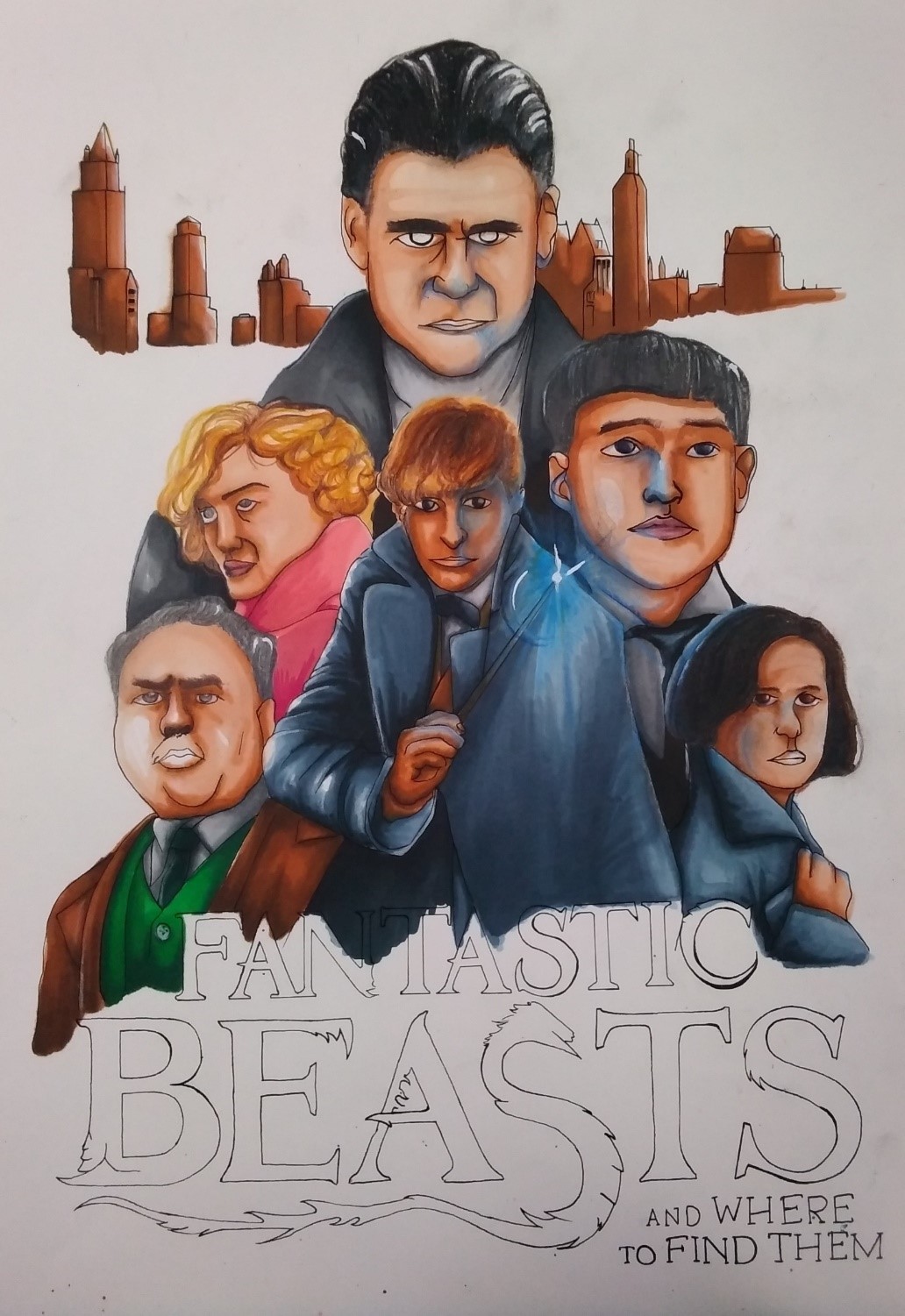 "I have been working on this unfinished piece for around a term now and it was mostly constructed with the use of alcohol markers, but in the case of certain highlights, I’ve mainly used pencils.

It’s inspired by Drew Struzan an American artist famous for his work on movie posters, he has designed posters for many famous movies, from Star Wars to Harry Potter and Back to the Future to Indiana Jones. His technique is easily recognisable with the use of different scales for different objects in the piece, drawing your vision to what he wishes you to focus on. The style has been copied by many poster artists, for example some of the posters for the recent movie Dune applied the same ideas. In my piece, I have taken the movie Fantastic Beasts and Where to Find Them and used Drew Struzan techniques to make my own poster for the movie. The process has taken me from splicing images together to make a digital copy of what I wanted to draw, to the sketching stage, and then up to where I am now with the inking." 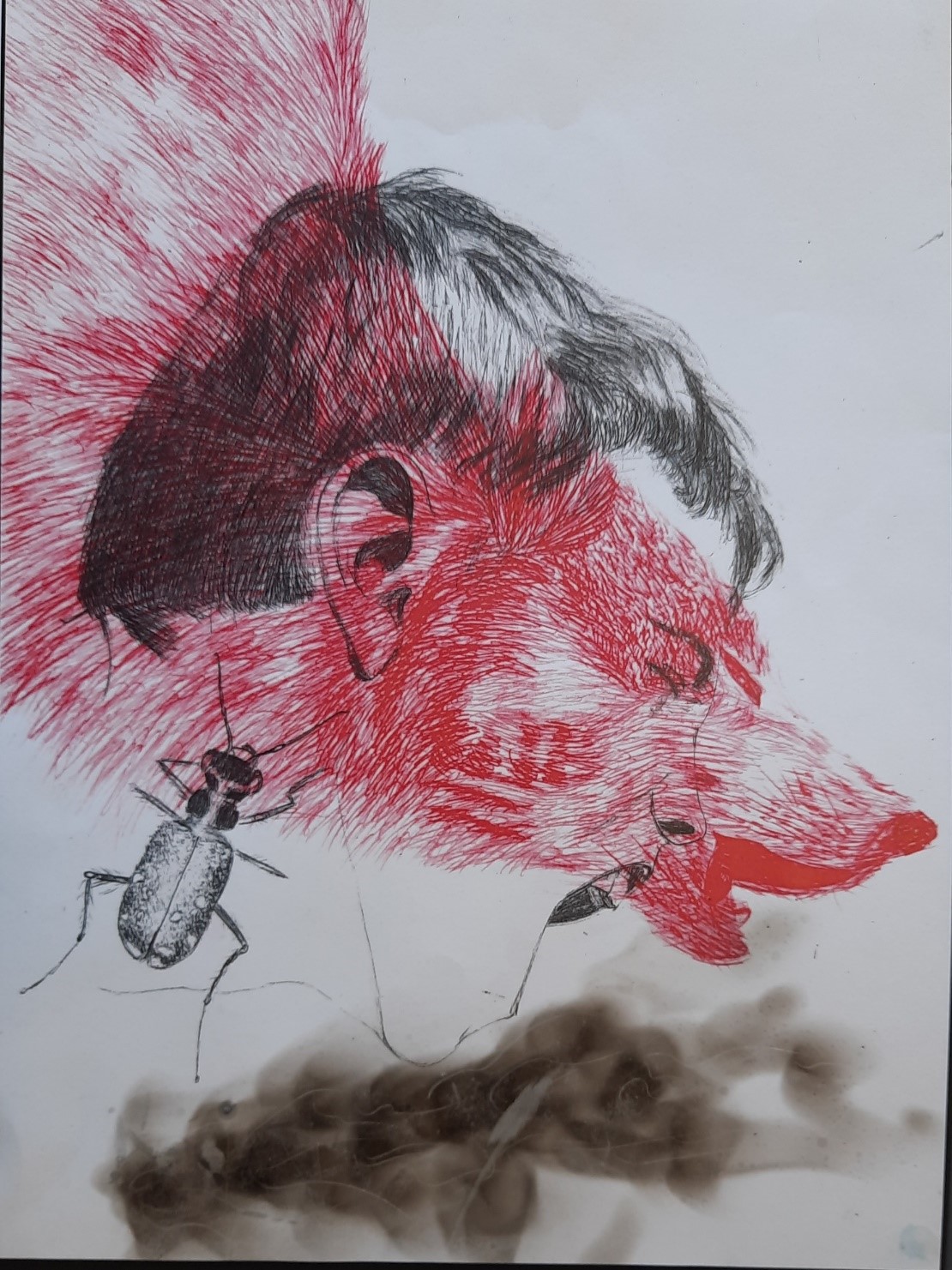 "In January of last year, the current group of GCSE Year 11 Art students began their second GCSE coursework Art project based around the style and motifs of Hong Kong-based artist, Peony Yip.

Much of her work uses zoomorphism to express strong emotions, often fear or anger but also pride and curiosity. She mostly superimposes animals over human heads, and creates beautifully realistic and intricate hair and fur, using only black and red pen for the humans and animals respectively.

Initially, I was somewhat surprised about this project, as it didn’t fit into what I thought a GCSE Art student ought to be doing, but quickly found that it was a fantastic opportunity to develop my drawing skills.

Beginning during a lockdown came with its own set of challenges, but the very manageable scale of each piece of work made this project perfect for the inconvenience of online lessons.

I found that the strong emotional and animal connections in this project made a welcome change from the grind of remote learning and the relaxing occupation of creating beauty, as I saw it, in this style helped me to continue to work on all my subjects during these unprecedented times.

An aspect of Yip’s work that we did not touch on so heavily was the societal comment evident in many of her pieces, and I feel that these are very thought-provoking and well worth a look."

These three personal creations provide a snapshot of the quality and variety of Artists we have at Warwick School. We are also very fortunate to have the space to display much of our student’s artwork around the school site.

And while I am not suggesting we follow one famous American Art school, who make their students sit in front of a painting for 6 hours to appreciate it, I would encourage all pupils and visitors to school to look at what is on the walls around you and try and just stop, for a short while, and consider what that piece of art is saying to you.