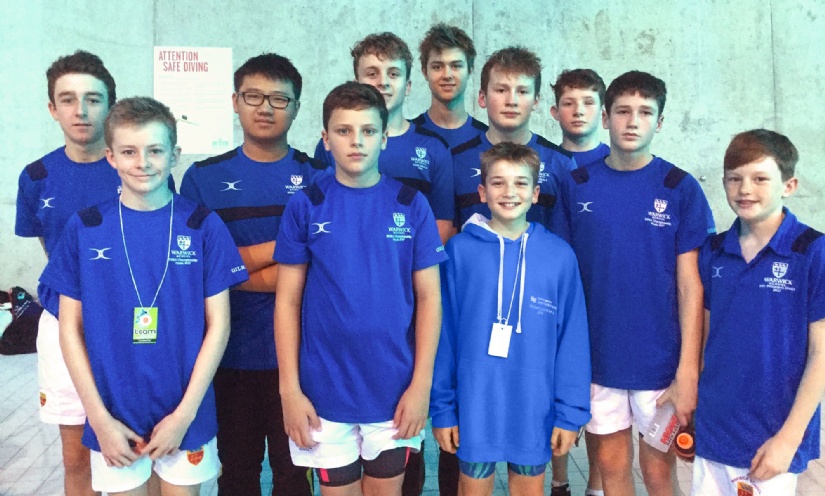 The school swim team started the 2018-19 season with a series of strong performances.

In September we returned to Stowe School to compete in their annual relay competition for the first time in several years. Our U16 team of Skip Snelson, Joe Hood, Morgan Evans and Oliver Hunt were in impressive form, sweeping to comfortable victories in the Medley and Freestyle competitions. Our U18 team of Max Holton, Matt Chillington, Ivan Chong and Kieran Speechly also produced a string of impressive performances, winning the Medley competition and narrowly missing out on victory in the Freestyle event.

Our U12 and U13 teams got their season underway with a home victory over our local rivals of Bromsgrove.
Our annual away fixture at Abingdon School proved as tough as ever for our U13, U16 and U18 teams. Despite some great individual swims, we came home dejected after a convincing defeat.

In mid-October, our U13, U15 and U18 teams took part in the English Schools Swimming Association  (ESSA) regional qualifying competition, heldat Warwick School. All our boys rose to the occasion producing swims at or near to their personal best times. For the first time in many years, all our teams qualified for the finals in both the Freestyle and Medley relay competition.

The 61st ESSA Secondary Team Championships were held once again in the Olympic pool at the London Aquatic Centre. Our U18 team improved upon their qualifying times in both events to finish 28th in the Medley and highly creditable 23rd in the Freestyle relay.

The U15 team suffered an injury set back in the warm-up to their lead-off swimmer Louis McAuliffe.
Louis’ current form suggested that he would have had an outstanding day in the pool if he had been able to compete. Skip Snelson stood in for the Louis to allow the team to race in the event, although their final rankings had to be annulled due to Skip’s age ineligibility.

Our U13 team carried high hopes into their competition after their strong qualifying performances in October. The team were unable to improve upon their qualifying time in the Medley Relay finishing 14th place. All eyes turned to the Freestyle competition where the boys had qualified for the final as the 4th fastest team. Charlie MacKenzie led off on the first leg with a strong swim before handing over to Issac Morison followed by George Gloster who both produced quick times. When Ruben Snelson entered the water in equal third place, he had a task on his hands to make up the 6-metre gap to the second place Mount Kelly team. With 10 meters to go, he had reduced the gap to less than a body length and we all started to believe that something special was about to take place. In a blanket finish for second place between Warwick, Dulwich and Mount Kelly we looked to the scoreboard for the result. In an agonising moment, the boys realised that their new best time of 1:59.57 had fallen short by one-hundredth of a second, with the other two schools tied for second place in a time of 1:59.56. Although the team felt obvious disappointment their exceptional performance will last long in the memory for their travelling supporters.