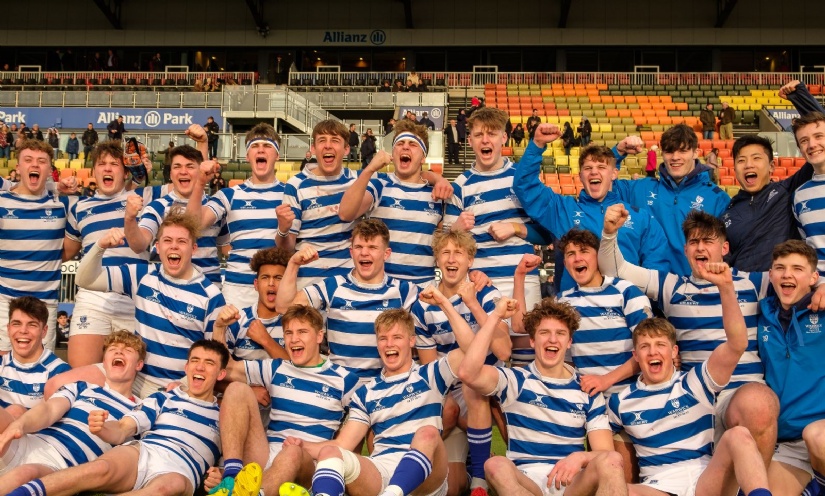 Warwick School’s 1st XV defeated a very spirited Woodhouse Grove team to move into the final of the U18 Schools Cup for the third successive season.

Warwick started poorly conceding a try in the first minute of the match to go down 7-0. Warwick were playing into the wind in the first half but managed to get back onto the score sheet with a powerful pick and go from openside flanker Oscar Roberts to cut the deficit to 7-5. Henry Mortimer narrowly missed a penalty which would have seen Warwick take the lead.

Oscar Roberts soon found a line-break again on the left side of the pitch, releasing the ball to inside centre Alex Green, who ran three-quarters of the length of the pitch, at pace, to put Warwick into the lead. Duly converted by Henry Mortimer, putting the score in Warwick’s favour at 12-7.

Henry Mortimer finished off a penalty chance to move Warwick further ahead, but Woodhouse Grove bounced back straight on the half time whistle to finish the half 15-14 to Warwick.

Captain Will Kelley had some calming and motivational words with his team at half-time, to inspire them to push harder in the second half.

With the wind in the second half, the team started very well moving into the opponent’s territory with some great carries from prop Alex Sabin, centre Harry Spencer and number 8 Roger Jackson. This enabled Warwick to score three converted tries in 15 minutes through centre Alex Green on a backs strike move, Alex Sabin from close range and then Alex Green once again for his hat trick of tries!

Woodhouse Grove did hit back with two further tries but Warwick held out comfortably to book their place at Twickenham on Thursday 21st March. This is a massive achievement for the team, who now aim to make history and retain the U18 Schools Cup title for the third successive season.

“It is a simple sentence but perhaps it sums up this remarkable Warwick team and story as well as any other. They simply have been there and done it all before, they know what it takes, they know what to do, and they keep their cool. Going behind as they did after just a minute, and again in the second half, would have triggered collapse in a lot of sides, we have seen that happen many, many times. This Warwick group never gave even a hint that it might unsettle them, and perhaps that is the biggest compliment of all.” fifteenrugby.com

Warwick School are now due to face Whitgift School in the National Cup Final, at Twickenham on Thursday 21 March, k/o 3.40pm.