A Busy Term for Warwick Debaters 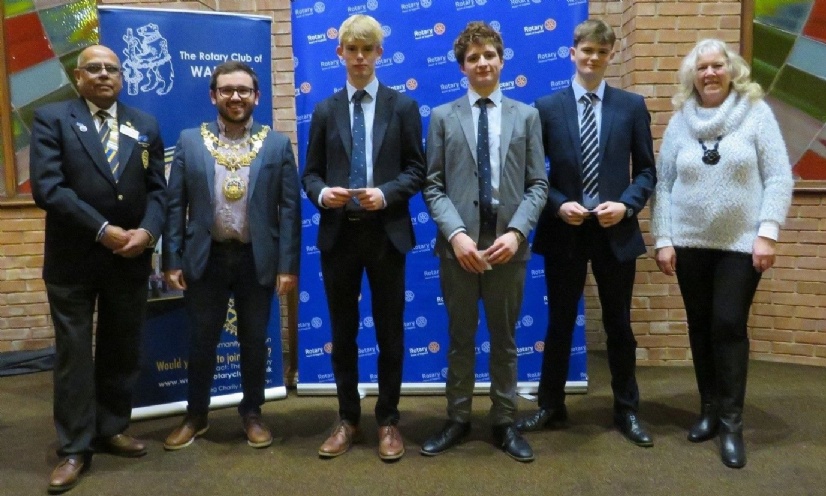 The debaters at Warwick have had a busy term with representations at the Cambridge University Debating competition; the ESU Mace and ESU Public Speaking Competition and the Rotary Youth Speaks.

The ESU Mace competition saw Sebastian, Elliot and Arjan in the second round of the competition, debating on the subject of lowering the voting age to 16. The judges praised their insight, argumentation and rebuttal but despite a convincing win over King’s High, they were unable to make it to the regional Final.

The U14A team were more successful in their ESU Public Speaking district final. Ptolemy, Tom and James debated on the subject of freedom of speech and defeated Concord College for the titles. The judge was immensely impressed with their professionalism and felt they had the talent to get to Nationals. As favourites, in next month’s Regional Final, it is exciting to see what they can deliver.

The Lower Sixth were the next competitors at the Rotary Youth Speaks competition with the fantastic trio of Ed, Atticus and Joshua debating on the relevance of History with a great effort and many crowd-pleasing gags. Unfortunately, they lost out to Princethorpe but were delighted to receive the runners-up position in their first attempt at this competition. Sadly, the U12s had to withdraw due to the Covid situation, but we will be re-running this competition next month.

A mix of age groups took part in the Cambridge Union Debating Competition on Saturday, 5 February, where the senior debaters took part in four rounds of British Parliamentary debating across the day. Motions ranged from the harms of social media to whether religious schools should be abolished.

While our teams did not make the break for finals day, they all had high placing and high scoring rounds. Well done to Elliot, Cornelius, Ben, Max, Jacob, Barnaby, Freddie and Ryan for their hard work.

Ben gave a particularly strong performance and ended the day as the 11th ranked debater out of 64 debaters from across the region. Our youngest debaters, Ryan and Freddie performed confidently throughout the day and took two second placings in their rounds. Jacob and Barnaby, both new to competition debating, also improved their style round on round to take a first-place position in their final round of debating. We look forward to seeing eight more of our senior debaters in action at the Oxford Schools’ Debating Competition in March.